Based on Graham's Stock Selection Criteria for the Defensive Investor.
Beating the market for over 70 years!

A stock portfolio consisting of stocks which are based on Ben Graham’s Stock Selection Criteria for the Defensive Investor is a robust yet simple way to beat the market. We present here a proprietary screener based on those criteria, with some modifications which we have found to yield the best risk-adjusted returns.

Benjamin Graham, known as the father of value investing and as the first quantitative investor in the new era, published his mechanical stock selection 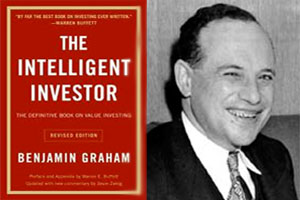 criteria in his 1949 seminal book “The Intelligent Investor.”
Graham makes a distinction between a risk-averse Defensive Investor whose primary goal is the preservation of principal and an Enterprising Investor whose primary goal is the maximization of investment returns.
Graham’s stock selection criteria for the Defensive Investor are based on the following principles (Graham, p. 114):

In chapter 14 Graham provides his lists of rules. Following are the rules and how we applied them:

1. Adequate size of the enterprise

we defined our stock universe to be the S&P 500. All constituents are large and prominent companies.

Graham suggested to filter out companies whose current ratio (current asset divided by current liabilities) is less than 2, or whose long-term debt is less than the net current assets (current assets – current liabilities). We assume that the constituents of our universe, the S&P 500, possess a sufficiently strong financial position. Applying further rules are not necessary. Such rules would be too restrictive and will result in losing good opportunities rather than avoiding bad companies. Our testing confirms this choice.

Graham suggested a positive net earnings figure in any of the last ten years. We are less stringent and require only five years with some net earnings in every year.

Graham suggested a minimum increase of at least 33% during the last ten years, using three-year averages at the beginning and the end. We adopted the rule as stated.

Graham required that the current stock price should not be more than 15 times the average earnings of the past three years. Given the much lower interest rates these days than in Graham’s day, we relaxed the rule to P/E <= 20.

Graham required that the multiple of P/E (using average earnings for the past three years) and P/B would be less than 22.5. This rule is interchangeable with the previous rule (OR function between them). We have relaxed it to P/E * P/B<= 30.

We have tested a portfolio of 15 stocks listed in the  S&P 500 which we held for one year (or longer). Once a year, we examined the portfolio rebalanced it. Based on our strategy rules, usually we replaced between two and three stocks. Over a recent period of 19 years, such strategy had amassed 10% a year (incl. dividends), vs. 5.59% for the S&P 500. It has done so with lower volatility and a lower maximum drawdown.

Applying these rules on the S&P 500 universe results in over 40-150 stocks at any given time. Graham allows the defensive investor to apply his own discretionary judgment as to which stocks to select out of this group. We have performed backtesting with numerous criteria, and we have found that choosing the least volatile stocks (as measured by 3-y Beta) provides the best risk-adjusted returns. Selecting stocks on the merit of either momentum or value results in excellent performance, yet the higher volatility may be uneasy to handle, especially for defensive investors.

Following is a performance summary of a portfolio holding only 15 stocks selected for their lowest 3y Beta, and re-balanced every one year: 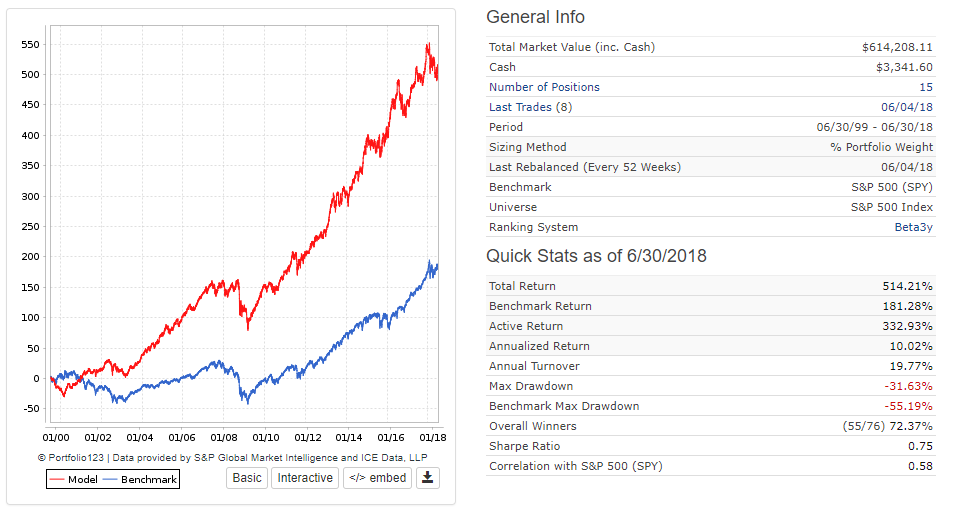 We are amazed that such a simple strategy beats the market by a wide margin for almost 70 years, and with less volatility and drawdown. Moreover, the asset turnover of this strategy is less than 20%, meaning that on average, every year only a fifth of the holding (or 3 stocks) are being replaced. The strategy is thus suitable for investors operating in either taxed or taxed-deferred accounts. The strategy provides an easy-to-maintain low-adrenaline low-volatility method to consistently beat the market over a holding period of several years. The Terms in the table are defined in the Glossary.

How to use the Screener:

The stocks in the screener are sorted based on their 3-year Beta Rank. The lower the beta, the higher the rank. Stocks with low beta tend to be less volatile and have higher expected returns (see research paper here).

Use the sliders to filter the results according to P/E, P/E or RoC thresholds.

We have written about Graham’s “Defensive Investor” performance in the following blog articles:
The Simplest Way to Beat the Market – Part I, Part II, Part III.

Please confirm deletion. There is no undo!
In compliance to GDPR, we'd like to inform you that we use cookies to ensure that we give you the best experience on our website. The use of this site implies that you consent.OK