Join a community of sophisticated investors!

Insights and tips to help you become a better investor

Join As A Member. It’s FREE!

A 70-years-old simple strategy (with minor tweaks) which beats the market over the long-term, and does so with lower volatility than the market – that is the subject of The Simplest Way To Beat The Market series  (Part I, Part II). The feedback I received was overwhelming. The notion of having a system to invest which is public for so long yet still works well, and on top reduced much of the emotional burden from investors – resonated with many. The most common response I’ve gotten was that the system brings consistency and ease of mind to ones’ investments.

70-y-old strategy which beats the market..and does so with lower volatility than the S&P 500. Check this out! Click To Tweet

Indeed Ben Graham’s Defensive Investor Strategy has a lot of merits. Primarily, it’s a system that has earned twice the market returns in a simulation of 18 years, and with less volatility than the S&P 500. It needs very little maintenance and has a low asset turnover, thus suitable for the individual investor.  In this article, I’d like to address its darker side.

Yes, it has a darker side. You see, it may be the simplest way to beat the market, but not the easiest.

Through the fifteen years that I’ve been studying finance and the financial markets, I have realized that there are three governing principles which contribute to investing success. Whenever I deviate from those principles, I lose. Whenever I stick with them, I win (more often than not). Those principles define my investment philosophy. I describe them in depth in the Investment Approach page of my blog. Here are the three principles in brief:

The third principle is the topic of this article.

Simple, But Not Easy

Let’s examine the performance of Graham’s Defensive Investor strategy during 1999-2001:

Imagine that you are an investor initiating Graham Defensive portfolio in July 1999. You would see your portfolio in a constant decline through April 2000, while the S&P 500 is meddling along sideways during that period (and internet stocks are booming). The paper losses on Graham’s portfolio would reach -30% by March 2000, full nine months after starting the portfolio. During that period, the S&P 500’s returns remain positive. I would imagine that many investors would lose faith in Graham’s strategy long before March 2000, condemning it to have “stopped working” and its advocates being charlatans. They may say that “times have changed” and Graham’s simplistic strategies do not work well anymore. They may refer to the new normal and call to abandon the old analysis and valuation techniques.

Had you started a Graham portfolio in July '99, you would lose -30% in 9 mo, but then beat the market by 2x. #volatility creates #opportunity Click To Tweet

But, if you were strong enough to hold on to the portfolio through its decline and recovery, you would see its losses turn into over-performance before the turn of the year 2000. 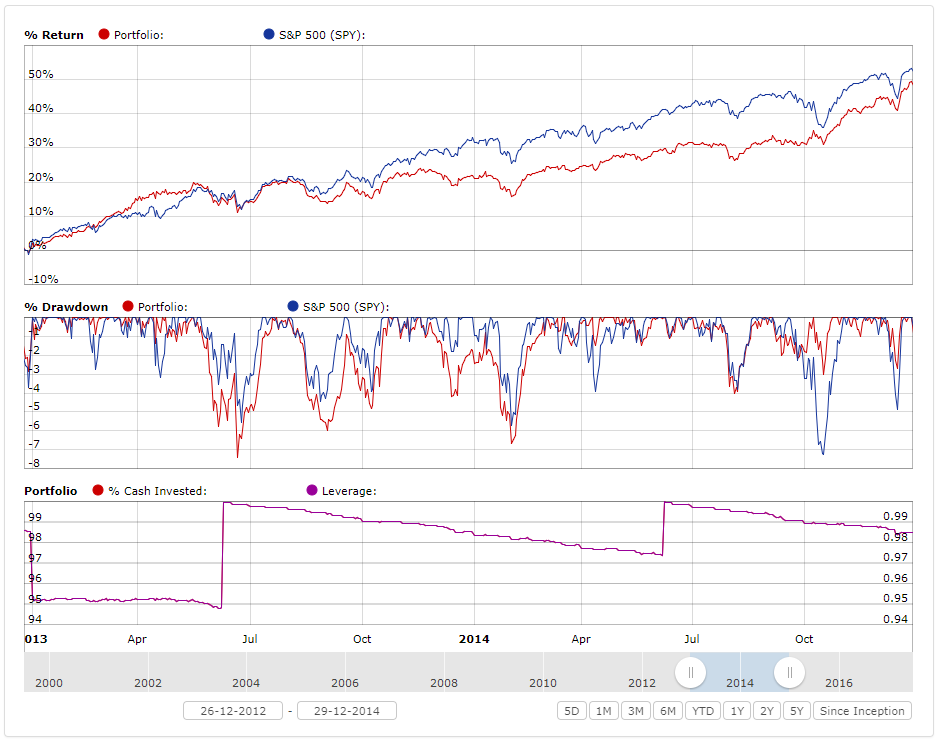 Would you have the temperament to hold on to a strategy that lags the market, sometimes by 10%, for almost two years?

Would you have the temperament to hold on to a strategy that lags the market, by 10%+, for almost two years? Click To Tweet

Now, we’ve seen (in the previous parts of this series) that over the long-term, Graham’s Defensive Strategy leaves the S&P 500 far behind. The takeaway from the two examples above is that the merit of a strategy cannot be judged during a short period of several months, or even a year or two. An investor must develop conviction in the strategy, and hold on to it for a longer term. Experts say, and we concur, that an investor with an investing horizon of fewer than five years should avoid stocks altogether.

Those results are NOT an indication of excessive risk nor volatility. Rather, it is an indication that the correlation to the S&P 500 is relatively low. Investing in Graham’s portfolio is not riskier or worse than investing in an S&P 500 ETF. On the contrary, Graham’s portfolio is better in every respect than the S&P 500 – it delivers higher returns with lower volatility. It just behaves DIFFERENTLY than the S&P500 on a month to month basis and on a year to year basis. Holding on to it for a long enough period, though, reveals its merits.

Why Is This Happening?

The Efficient Market Hypothesis (EMH) is a theory in financial economics that states that assets’ prices fully reflect all available information. A direct implication of it is that it is impossible to “beat the market” consistently on a risk-adjusted basis. The EMH was developed by Professor Eugene Fama who preached that stocks always trade at their fair value, making it impossible for investors to either purchase undervalued stocks or sell stocks for inflated prices. As such, it should be impossible to outperform the overall market through expert stock selection or market timing. The only way an investor can obtain excess returns is either by sheer luck or by purchasing riskier investments.

Nowadays it is evident, and even Fama acknowledges it,  that there are limitations to the EMH theory. Stock factors (often called Smart Beta Factors, or Anomalies) such as small size, value, momentum, low volatility, and quality – result in excess risk-adjusted returns that the EMH has fails to explain.

The phenomenon of having anomalies not explained by the Efficient Market Hypothesis is known as Limits to Market Efficiency.

The question becomes – if such anomalies exist, and they are all well known, how come they are not exploited by savvy market participants?

Well, they cannot be exploited,  (i.e., arbitraged away) due to the inherent structure of the financial markets. In financial jargon, it is known as Limits To Arbitrage. You see, professional money managers manage most of the world’s capital through institutions, be it in mutual funds, endowments, pension funds, hedge funds or other instruments. The public selects most money managers based on recent performance, usually up to 1-3 years. While the exploitation of stock factors such as small size, value or momentum works well in the long term (3-5 years duration or more), in the short term, there will be inevitable periods of underperformance, ranging anything from a few months to one year, two years and even three years. When a money manager underperforms for several years in a row, she will soon be out of a job. There are limits to the extent that a professional money manager will be able to exploit strategies with low correlation to the S&P 500 if they want to keep their career. It would be far easier to stay close to the indices and take smaller bets.

So many people select money managers based on 1-3 years performance. That is so wrong! Click To Tweet

Wes Grey has written a seminal article on this phenomenon. The article is a must for every serious investor – Even God would get fired as an active investor. Wes portrays an interesting analogy. Let’s say that God is a professional money manager. God has perfect foresight, to the stocks that will yield the best returns in five years from now and he picks them all to his portfolio. It’s the absolute best portfolio that no human being can beat.

Now, Wes Grey shows ten 5-year periods where DURING those five years, God’s portfolio lags the market, suffering awful drawdowns. The drawdowns are so horrible that they range from 20% to 75% loss of capital before they recover and yield the best-of-the-best unbeatable performance. The duration of the temporary under-performance range from 122 days to 1005 days. How long do you think God could keep his job before he gets fired? 60 days? 120 days? 365 days? 730 days? After losing 10% of capital? 20%? 50%?

And that’s why investing in factors through quantitative strategies remain a niche that most individual and professional cannot exploit. As long as most of the investing public is short-term oriented (and I think it’s not about to change anytime soon), quant strategies will continue having an edge.

Beating the market is simple, but it is not easy. Market-beating strategies often have low correlation with the broader market. They sometimes go up while the market goes down (and nobody complains), but they sometimes go down when the market goes up (and then individual investors lose faith, and professional investors get fired). The secret of beating the market is persevering through tough periods. It’s easier when you have a system that you follow mechanically, no judgment involved. Such a system is my implementation of the Ben Graham’s Defensive Investor Strategy.  On TalDavidson.com, I post a screener with the most attractive stocks to buy, based on my interpretation of Graham’s Stock Selection Criteria for the Defensive Investor (with a few tweaks). I keep if FREE for everyone use and benefit. Moreover, we’re building a community of smart individual investors, and this community will help us all live through the tough periods and achieve long-term investing success.

A personal note: throughout the fifteen years I’ve been investing, I’ve made tons of mistakes, and learned a lot in the way. I share my mistakes (and how you can avoid them) with my most interested readers, through emails. You are welcome to sign up for my FREE email service, where I share the most personal investing experiences and lesson learned over the years. It’s for real. And BTW, I’m not selling anything.

Hi, I’m Tal Davidson. I develop quantitative investing strategies which are based on deep academic research. I’m not the ordinary finance guy. I’m more of a technology geek, working as a computer engineer in one of the largest tech companies in the world. I’ve been learning and experimenting with investment strategies for the last 15 years. In the last few years, I perfected several strategies and have made the transition to being 100% quant. My commitment is to guide you in creating your own quantitative portfolio with confidence, even if you’re not a programmer. You too can the master quant strategies that have the power to help grow your capital and achieve life-changing returns!

Free Ebook with Tons of Insights

Send it to me!